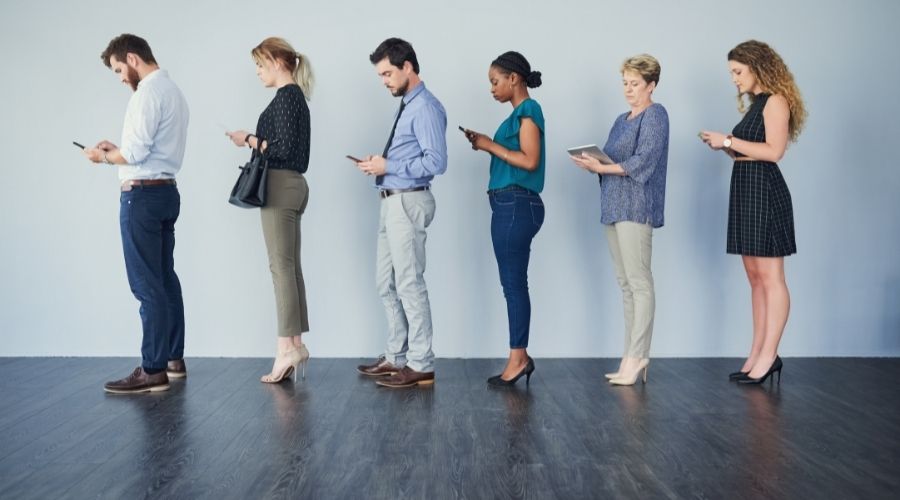 Waiting in line to leave and enter your job?

As an Amazon employee, do you feel as though you should be paid while you wait to go through security checks?

Amazon has been ruthlessly defending themselves when it comes to lawsuits from their employees.

Defending its employment practices in court will likely prompt more lawsuits against Amazon.

As reported by CNET[1] on June 15, 2021, several years ago one Amazon worker sued Amazon for screening him at the end of the shift at their warehouse to ensure he was not stealing inventory.

Claiming that Amazon was taking something from him, the case made it all the way to the Supreme Court. In the Supreme Court the worker now is joined by others that argue they should be paid for waiting in long lines and having their bags and pockets searched.

Workers said that Amazon required the process so the time should be considered work. The justices disagreed, ruling that Amazon did not have to pay their workers for time spent in line or being screened.

This 2014 case is known as Integrity Staffing Solutions v. Busk.

The searches have apparently gotten shorter but the COVID pandemic has created new issues. Former Amazon warehouse employees sued Amazon because they did not get paid for the mandatory COVID pre-shift checks.

Amazon claimed these screenings did not require payment because they were part of helping the COVID effort. “Because the pandemic threatens all members of the community, it has necessitated preventive action by everyone for everyone’s benefit,” Amazon argued in a court filing. Shortly after, Amazon asked a judge to throw the case out.

Under California state law many other large companies have had to pay their employees for these searches. CVS and Apple are just two examples of companies who have had to pay their employees large sums. Although Amazon is similar in practices it is much larger, thus providing it with more power to change the way employment law is applied. Amazon currently employs around 1.3 million people and half of them are in the US.

The New York Times reported that Amazon has been blowing through the work force replacing the equivalent of their workforce every eight months. Amazon is now in the same class as Walmart, who has helped effectively reshape class-action law in 2011.

Amazon is likely to be involved in even more lawsuits as they continue to grow. Strict treatment of their employees is not only for their warehouse employees, Amazon’s office workers are pushed into a review process that’s outcome is 6% of them leaving Amazon.

The leaving is called “unregretted attrition.” The result of these is “more precedent-setting cases” which affect not only Amazon’s employees but how law is applied in the workplace throughout America. Amazon has defended itself in lawsuits so far but the lawyers say that Amazon is expecting more tough court battles.

In 2010 the Busk case was filed in 2010, workers said that the line for security screenings took about 10 to 15 minutes. The Amazon employees’ attorney, Buck, said that after an appeals court ruled that federal law required them to pay their employees for the security checks. In court filings Amazon claimed their security checkpoints took no time and workers often walked through the checkpoints without breaking stride. But, COVID screenings take over 20 minutes, claims the California workers that are suing Amazon.

As their busiest time of year occurs, Prime Day, many Amazon employees are clocking four 10-hour days each week. An extra day of work means extra screening and more wait time in line.

Another group of lawsuits, Amazon workers in California said they have to walk far and wait in lines during their breaks. Suing Amazon for failing to give them full rest breaks and meal times.

California law says they have to relinquish control over workers during breaks but the workers say this is not what occurs. Workers say they have to walk across warehouses that can range between 600,000 to 1 million square feet to reach break rooms meaning they only get 10 minutes of real rest, the legal bare minimum for breaks.

One federal judge agreed with Amazon that the Amazon workers in California were still receiving their full breaks despite the far walks to break rooms.

The judge said that the security screening complaints varied so widely that the complaints could not be resolved for all workers. Many workers spent no time going through their security but others said their Amazon warehouses don’t have any metal detectors. Resulting in the workers being unable to pursue those claims in court unless a higher court were to reverse the judges ruling.

The Supreme Court claims Amazon does not have to pay their workers for security checks due to a federal law called the Portal-to-Portal Act. Under this law, tasks performed by employees as they begin or end their shifts do not require compensation unless they are part of the work they are hired to do. Security checks have no bearing on whether a warehouse worker is safe or effective.

One random security check point put Jennifer Bates over the edge in Bessemer, Alabama. After she learned she would not get a longer rest period to screen, she underwent trying to leave the warehouse on a break, she joined the effort to unionize in the warehouse.

This election for a union was unsuccessful. The National Labor Relations Board found Amazon to retaliate against employees who organize strikes and walkouts.

During oral arguments for the Busk case, Chief Justice John Roberts asked why the employees can’t take their complaints over security screenings to the bargaining table. Maybe they could ask for higher wages if they aren’t going to be compensated for the screenings, he said. There is no bargaining table. These are all non-union employees, said Mark Their man.

If you feel you’re unable to voice concerns about your working conditions at Amazon, contact us for further assistance at: CJR@AmazonEmploymentLaw.com